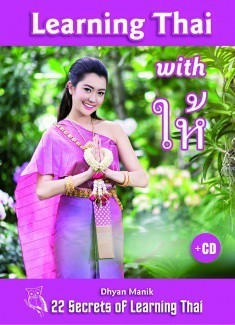 hâi, along with words like dâai, láew and kôr, is one of the most important words in the Thai language.

When speaking Thai, it is important to understand the correct usage of the verb hâi in everyday speech.

One simple way to use the verb hâi is “to give something to someone". It is used in a similar manner as the English verb “to give".

In addition, hâi is used as a causative verb which has several different meanings depending on the situation, and the way it is spoken. It can be translated into English as to let, to allow, to make and even to order or to force someone to do something.

In some situations hâi is better translated into English as the preposition “for", as in “for you", “for me" etc. It is also often used in idiomatic phrases where it carries no meaning itself but denotes only the sense of a command.

Thais use the verb hâi in an intuitive way in a variety of situations in order to express feelings, wishes, commands and nuances of meaning while communicating with each other every day.

If you learn this word well, you will be rewarded.

Save this product for later
Display prices in: EUR